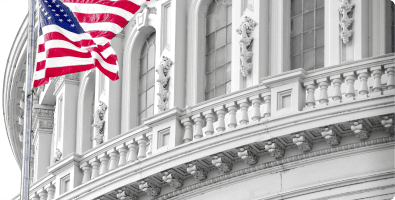 :resolve the status of the millions of illegal immigrants already in the United States, encourage illegal immigrants to assimilate to the U.S. and learn English, enhance border security, introduce a temporary guest worker program, and penalize employers for willingly hiring illegal immigrants. Bush also believed that in order for the immigration problem to be solved, all these issues must be dealt with simultaneously. The Bush administration did make progress in enhance border security. For example, border security funding increased from nearly $5 billion in 2001 to over $10 billion in 2007. The number of border patrol agents has also increased from 9,000 to almost 15,000 during the same time span. By the end of next year, there should be approximately 18,000 border patrol agents. Six-thousand National Guard troops have been called to temporarily assist the Border Patrol with such duties as intelligence analysis and improving infrastructure and patrol roads. In addition, investments in more advanced border technology continue. The increase of availability of detention beds has reduced the “catch and release” policy previously employed due to the shortage of beds. Now, however, more illegal immigrants can now be detained. Other changes include increased deportations of illegal immigrants (especially those with criminal backgrounds) due to a quicker “expedited removal” process. In addition, there is now greater cooperation among local and state local law enforcement and the Department of Homeland Security to prevent illegal immigration.

Former President Bush’s Proposed Immigration Legislation
On June 29th the United States Senate squashed the proposed comprehensive immigration legislation, ending chances for President George W. Bush to pass his immigration reform plan–a centerpiece of the president’s domestic agenda. Immigration reform supporters garnered just 46 of the 60 votes needed to conclude debate and proceed to final passage. Sixty senators, including 37 of Bush’s fellow Republicans, voted against it. Most senators said they had no plans to try to overhaul immigration law before the 2008 presidential election, so it is unlikely that any major immigration bill will become law until 2009. The biggest obstacle was to convince conservatives that the path to citizenship for illegal aliens is not Amnesty. The bill’s bitter end has a deeper meaning, as it demonstrated that conservative Americans’ vision for US immigration reform should not include any type of amnesty or legalization for undocumented workers.

The measure, the biggest rewrite of U.S. immigration law since 1986, would offer 12 to 20 million illegal immigrants a path to citizenship while tightening the border with Mexico and creating a guest-worker program to help employers fill low-paying jobs.

President Bush, who had lobbied Republican senators to support the legislation, acknowledged defeat, saying that – “Congress’s failure to act on it is a disappointment.” The Bush administration is still interested in finding the solution to the problem of illegal immigration, said Michael Chertoff, Bush’s homeland security secretary who helped draft the legislation. The Bush administration also aggressively targeted employers who knowingly hired illegal immigrants. While there has always been laws prohibiting the hiring of illegal immigrants, these laws have not been consistently enforced. In the past, employers who hired illegal immigrants, at best, faced a modest fine. They often continued to hire illegal immigrants, even after paying a fine. Enforcement has increased, however, and last year alone over 4,000 arrests were made; a number seven times greater than the arrests made in 2002. Enforcement funding was doubled and special task forces were created to dismantle criminal rings specializing in counterfeit documents, such as falsified Social Security information that could be used to gain employment. The Department of Homeland Security is also proposing a “no-match” regulation. This electronic system, would make employers more easily aware if they hired someone who provided an inaccurate Social Security number. It would also remind them that they could be held liable for hiring these employees. Other proposed legislation includes introducing a standardized ID card for legal foreign workers that would show their legal status so that employers could easily identify them. Many also feel that a temporary worker program would help to alleviate issues regarding border security. The reasoning behind this is that if companies are legally permitted to hire the workers they need, there would be substantially less pressure on immigration enforcement officials. Border Patrol officials could then focus on targeting drug dealers, terrorists, and other criminals instead of individuals who desire to come to the United States solely to work. The program would be temporary and violators would be denied the opportunity to become permanent residents and citizens. In addition, American workers would be given priority to positions, and only after positions remained unfilled would the jobs be made available to temporary workers. The number of temporary guest workers would be determined by the market.

Another issue that has to be addressed is dealing with the undocumented immigrants already residing in the United States. There are many illegal immigrants who have lived in the U.S. for many years, and besides not having proper immigration documentation they represent what one would consider a hardworking, trustworthy lifestyle. Many immigrants come to the United States to worked hard, and are often considered to be a “good resident.” According to the former President Bush, they should be taken “out of the shadows” and given the opportunity to not be looked down upon. Regarding his immigration reform plan, the former President also was quick to state that illegal immigrants should not be granted automatic permanent residency or amnesty since this would be unfair to those who have been patiently waiting for years to obtain residency and to enter the U.S. legally. Illegal immigrants given the opportunity to a path towards citizenship would be required to: learn English, pay a substantial fine, have a job for “x” years, clear a background check and pay their taxes. In addition, they would not be given preference in the application process and would go to the end of the application line. Bush’s immigration reform plan also addressed the assimilation of illegal immigrants into American society. He believed it to be crucial for all immigrants to learn English and understand American culture and values. By assimilating, immigrants would be more equipped to achieve their dreams, advance in their careers, and contribute to the cohesiveness of America. To better help immigrants assimilate, volunteer organizations would provide assistance by offering courses in English and civics among others.